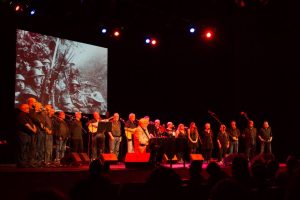 ‘… A standing ovation raised the roof of the Queen’s Hall for several minutes after the show had finished. It was a stirring end to a night commemorating a terrible tragedy, one that left the entire audience moved and sombre, but strangely elated.’

Completed Dates: All the shows on the tour have now been completed, either to capacity or near capacity audiences – and in every case to hugely appreciative audiences and great feedback. The final performance of the show which took place before a capacity audience on Sunday, November 11th, the 100th anniversary of the Armistace, was a fitting end to the whole project.

FOR UP TO DATE INFORMATION – please visit www.the-mccalmans.co.uk

FOR UP TO DATE INFORMATION – please visit www.the-mccalmans.co.uk

About the 2018 Scottish Tour

The full Far, Far from Ypres  stage show is touring Scotland between August and November 2018.